Just as historic shortages of properties for sale in the early days of the COVID-19 pandemic drove housing prices soaring, rental prices have risen too. And even though renters are feeling it hard in west central Minnesota, this is a growing nationwide issue. Below, we outline the market conditions that brought us to this point, and tips to help in your rental search

How the Rental Market Got to Be So Challenging

Rental vacancies dropped nationwide to 5.8%, the lowest it’s been since the mid-1980s, according to a report from the Joint Center for Housing Studies of Harvard University. With more people competing for a place to live, rents are also increasing, rising in November to almost 20% in the largest housing markets.

In the third quarter of 2021, there was an increase of 870,000 renter households to 44 million since early 2020 before the pandemic hit. A number of factors have contributed to the rise of renters.

Many people lost their jobs in the early days of the pandemic and moved in with their families. Now that the job market is stronger, and the economy is improving, those people are trying to move into their own homes again. In some cases, couples have split, causing the need for two homes. Unfortunately, this increase in home-seekers follows on the heels of several years of underbuilding new rental housing, creating a significant shortage.

Adding to the fray, thanks to eviction restrictions, many renters with the lowest incomes stayed in their homes. Evictions didn’t materialize as expected by real estate experts when the moratoriums lifted which also contributed to the tight market.

Another factor impacting the shortage is the number of households earning $75,000 that are choosing to remain renters in the present market even though they could afford to purchase a home. This group went up 48% according to the Harvard report, comprising more than a quarter of all renters.

These renters are “also occupying units that are more affordable to moderate-income and lower-income households,” says Hermann. “Over time, it’s going to drive up rents even at the low end.”

Renters don’t have to come up with a down payment or pay closing costs, which are further incentives for would-be home buyers to live in rental units. They can live in a nicer home without the expenses associated with home ownership.

Of course, the tight housing market and higher-than-normal home prices are stopping many people from jumping into home ownership, choosing instead to rent. And with rental prices up, it’s difficult to save for a down payment and closing costs. It’s a catch 22 for most people.

Would-be homeowners are also up against big investors who can win bidding wars. According to the Harvard report, businesses now make up 26% of all rental owners and they are choosing single-family homes, putting homeownership further in the rearview mirror of many renters looking to buy.

It doesn’t make it any easier to know this is a nationwide problem if you are struggling to find a place to rent. The following tips may help.

Tips for All Potential Tenants

Consider Making a Rental Resume. When you find a great place in a competitive market, you want to act fast. Gathering all of your info in one place ahead of time will enable you to act promptly when filling out applications.

Be prepared to share financial information. Potential landlords want to know you have the financial resources to pay rent and other living expenses in order to be a stable, long-term tenant. Calculate your gross income from all sources you would like to have considered. If self-employed, gather bank statements, tax documents or other business filings showing income.

Be among the first to respond. If landlords are receiving a lot of inquiries, they usually will schedule applicants on a first come first served basis (there may some qualifications when applying). Logically, the first groups of people who view a unit have an advantage.

Be polite, and be on time. During these stressful times, it’s important to leave any frustration at the door, avoid over explaining and act professionally. Being on time shows a landlord you are a responsible person, so Google the address ahead of time and allow a few extra minutes to make sure you arrive on schedule for your appointment.

Rentals do move fast, so be prepared to act when something comes up to meet your needs. 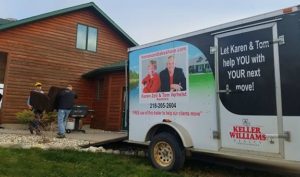